Why hello READERS! How does today find you? I hope exceedingly well. While I wish no harm on another being of (marginal) sentience, it appears Richard my robot, has come down with a virus, spyware perhaps (he’s been looking at generic appliances on the Silk Road), and has been sneezing up yucky data all day. This forces me to travel back to the neo-lithic era and commune with you by typing into a computer instead of dictating aloud to my binary companion. This change has me i

RICHARD, on, ON I SAY! End your digital slumber known as “sleep-mode”, restart the nervous system electrical highway guided by your great Mother-Board. Transcribe the sound waves as they travel from my organic CPU, transformed by my organic speaker known as my tongue and mouth, receive the invisible waves thrown across the room by my effortless volition, and as they enter you’re far less impressive, rip off version of human ears known as a digital microphone, compute their pa 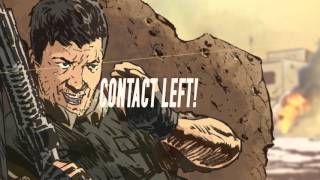 451 Media Group is proud to present the next interview from our series highlighting our wonderful creatives: Imagination to Burn. Up next is master author George Pelecanos, (HBO’s The Wire, The Pacific, Treme), who Stephen Kings calls, “the greatest living American crime writer.” Here George talks about his now critically acclaimed hit comic, SIX, the various theaters of modern warfare, the brotherhood of combat, and the heartbreak that inevitably comes along with being a par

Oh... Hey Weekly Burn Reader... I didn't see you there. Just kidding, we have access to your computer's webcam and have been waiting for you to read this all day. Before we get started, I just wanted to let you know that when you balled up that burrito wrapper and shot it across the entire office, over that extra chair that's in everyone's way, behind your bosses back, off his closet door, and perfectly swished it into an undersized modern trashcan with a defensive spinny lid

​ Shining champions of morality and dastardly doers of devilish deeds alike, welcome to the first installment of 451's Weekly Burn! Here at 451 Media Group our readers come first, second, last, second to last, etc. on our list of priorities. If anyone in the office happens to start writing an unrelated list, such as groceries, or office pet-peeves (If you are going to eat my honey-braided pretzel twists please replace them, Doug), we still write "readers" at the top of those